Two Victorians who snuck into Perth using false documentation to attend the sellout grand final have pleaded guilty to their charges after spending the past 15 days in custody.

The mad Demons fans went to the premiership decider at Optus Stadium on September 25 and were snapped mingling among players in the change rooms after the team’s drought-breaking win against the Western Bulldogs.

The pair breached Western Australia’s strict border rules because they did not meet criteria to get an exemption to enter the state – coming from a high risk jurisdiction – did not have a Covid-19 test 72 hours before leaving it and show evidence of a negative result, and did not declare on their G2G form that they had come from Victoria. 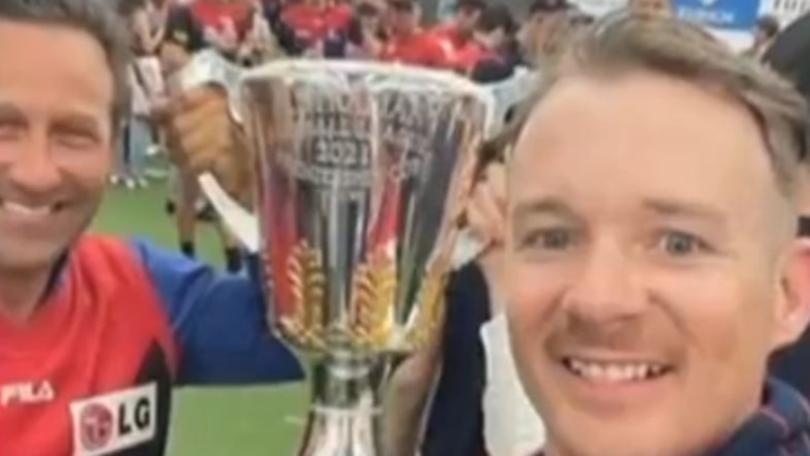 When NT Police went to the property, the residents said they had never heard of the pair.

They were arrested days later in Bunker Bay, in the state’s South West region, after WA Police called for public tip-offs to find them.

Both were charged with three counts of breaching the Emergency Management Act – which has a maximum penalty of 12 months in jail or a fine of $50,000 – and fraud for the falsified documents.

Mr Rafferty argued Babbage had come from Mount Hotham, which was not subject to stay-at-home orders at the time.

“You know you’ve been in an area that hasn’t got Covid … you make an appalling decision,” he said.

Mr Rafferty said his client was deeply remorseful and a first-time offender who had engaged in “one ongoing course of conduct”, but conceded it was selfish while the fraud charge was serious as it involved “an element of deceit”.

Mr Burbank’s defence counsel Andrew Tehan did not make sentencing submissions on Wednesday morning but the matter will resume in the afternoon.

Perth was on edge after the pair’s actions emerged and one of the men returned an inconclusive Covid-19 test result, but he was later cleared.