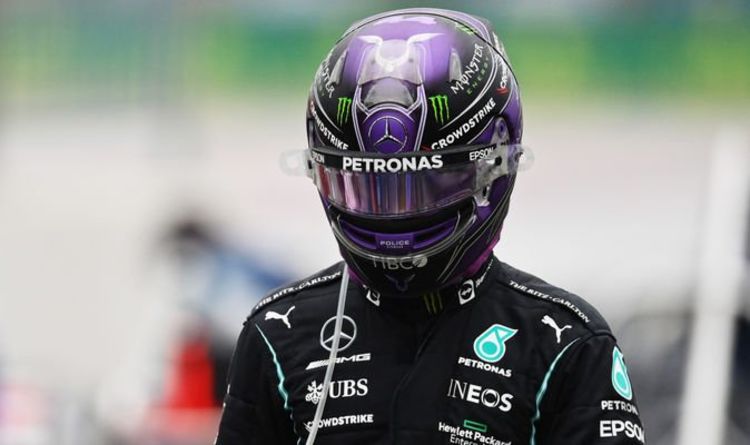 Lewis Hamilton was left fuming on his team radio after Mercedes opted to pit the seven-time world champion for fresh tyres during the latter stages of the Turkish Grand Prix. Sitting in third place, Hamilton originally ignored the call from the team to come in and change for a fresh pair of intermediate tyres.

After starting 11th thanks to a 10-place grid penalty for changing his engine ahead of practice, Hamilton carved his way through the pack, finding himself up in third after a brilliant battle with Red Bull’s Sergio Perez.

The seven-time world champion was then told to pit for new tyres, with the 36-year-old responding: “Why?” to his race engineer Pete Bonnington. “It feels like we should stay out,” added Hamilton.

The Briton ignored the call, telling the team “I’m going to stay out” on the same set of tyres he started the race on, however after admitting he was starting to lose grip, he dove into the pits on lap 51 of 58.

Rejoining in fifth place, the gamble didn’t pay off for Mercedes, with Hamilton struggling to get past the Ferrari of Charles Leclerc.

The 36-year-old was heard fuming on the team radio to his team, clearly angry at the decision.

“We shouldn’t have come in,” added Hamilton. “Massive graining man. I told you.”

Shortly after, Bonnington was heard giving Hamilton an update on Alpha Tauri’s Pierre Gasly, who was in his rearview mirror in sixth place.

In the race to win his eighth F1 Driver’s Championship, Hamilton was confident coming into the race.

“Well, I was third already at Turn 1 last year, so that made a bit of a difference,” Hamilton said to Sky Sports F1.

“So my eyes are still solely set on winning the race. It will be very hard from 11th but not impossible.

The race was eventually won by Hamilton’s team-mate Valtteri Bottas who started on pole position, with Verstappen finishing second, retaking the lead of the world championship title.

Speaking after the race, Verstappen said: “Valtteri had more pace but overall very pleased. It was all about managing the tyres. I’m happy to be on the podium.”

“And back in the lead of the championship, of course.

“It’s been close all year and we need to keep pushing.”